The proposed building is an open and hospitable structure conceived as an extension of the campus’s public space. It is designed to enhance interaction and communication between students, teachers and visitors. It is also designed as a sculpture that allows both the creation and exhibition of art, facilitating serving and helping the creative process , offering multiple places where art can be exhibited discussed and created. The new art school is an “equal” but distinct presence within the campus one that does not overshadow the industrial buildings surrounding it. It completes the existing campus by creating new intermediate spaces between new and existing buildings, places that generate a multitude of frames towards the landscape mountain and plane and also a multitude of open spaces able to host different activities.

The proposal places the elderly day care centre and its garden on an artificial level on top of the kindergarten. This gesture multiplies the open green spaces of the plot. A circular hole on this artificial level allows for controlled communication and access between elderly and kids. The proposal’s public space is composed by a square park, a small entrance square and a  pedestrian road enclosing the totality of  the program. On the aesthetic level the project is a fusion  of the archetypical house and the wooden abstract Bauhaus toys. Various gardens and trees unite all ages in a stimulating and activity provoking environment.

Rehabilitation of hydroelectric plant and landscape around Agyia artificial lake

Agyia artificial lake together with the small power plant is a project inaugurated by Prime Minister Eleftherios Venizelos in 1928. The 0,30MW plant was operational until 2005. For the landscape and its organic connection to the building, natural materials fitting with the sensitive ecosystem of the area were mosntly used: earth and treated timber. The building’s modern architectural vocabulary was left untouched. Its new function as an exhibition space for renewable energy systems incoroporates the building itself as an 1:1 scale experience of hydroelectric energy production. Steel and concrete bases were designed for the exhibits and a 1:100 scale model is used to dislpay the water circulation from the penstock to the elevated tank, the turbines and eventually the escape canal. The retaining wall surrounding the pilotis that supports the water tank are connected so as to generate a continuous line on wich most of the exhibition panels are located. 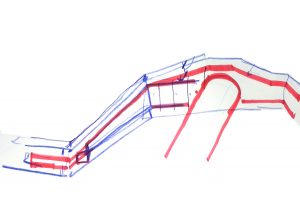 The study looks at the organic continuity and connection of the monument of Neorion and the Venetian harbor with the modern city. The proposal is based on three axes:

The study suggests housing the gap between the canals and the warehouse and creating a multiple two storey space. The resulting space, bridging / absorbing the difference in altitude between sea level (-neoria Venetian harbor) and city level (Street August 25), connecting the two levels with a closed multiple room / foyer, which is the entrance to the complex from both the level the sea as well as the city level.

At the same time, this area delimits / creates two new squares, one at the level of the City and one at the level of the Venetian harbor. Moreover, the continuation of the Venetian harbor with the sea, which has been interrupted due to the passage of the coastal road, is restored by creating an opening / crossing under the coastal road. In this way, the square created at the junction level is both a starting point and the end of the coastal ride on the pier. The two new squares are connected both visually and naturally through the outdoor staircase / theater located at the site of the old gate of the canals.

Inside the shipyards and the warehouse the main functions (theater, temporary exhibitions and permanent exhibition hall sited in existing shells in pairs with their intermediate space as foyer so you can work alone or in combination.

The building explores the relationship between the public and the private sphere: it is both a usable space and a public passage. As a result of the diagonal positioning of the building’s main axis, its main face is strongly associated with the square of Agia Paraskevi, while the open space is divided into two interrelated courtyards: a north, open to the city, which serves as an entrance to the building, and a south, inner, leading to an open theater and connected to adjacent uncovered spaces by completing their rectangular shape. The two courtyards communicate through a pilotis, creating a continuous flow from which the City Hall Hall and the Multipurpose Hall emerge. 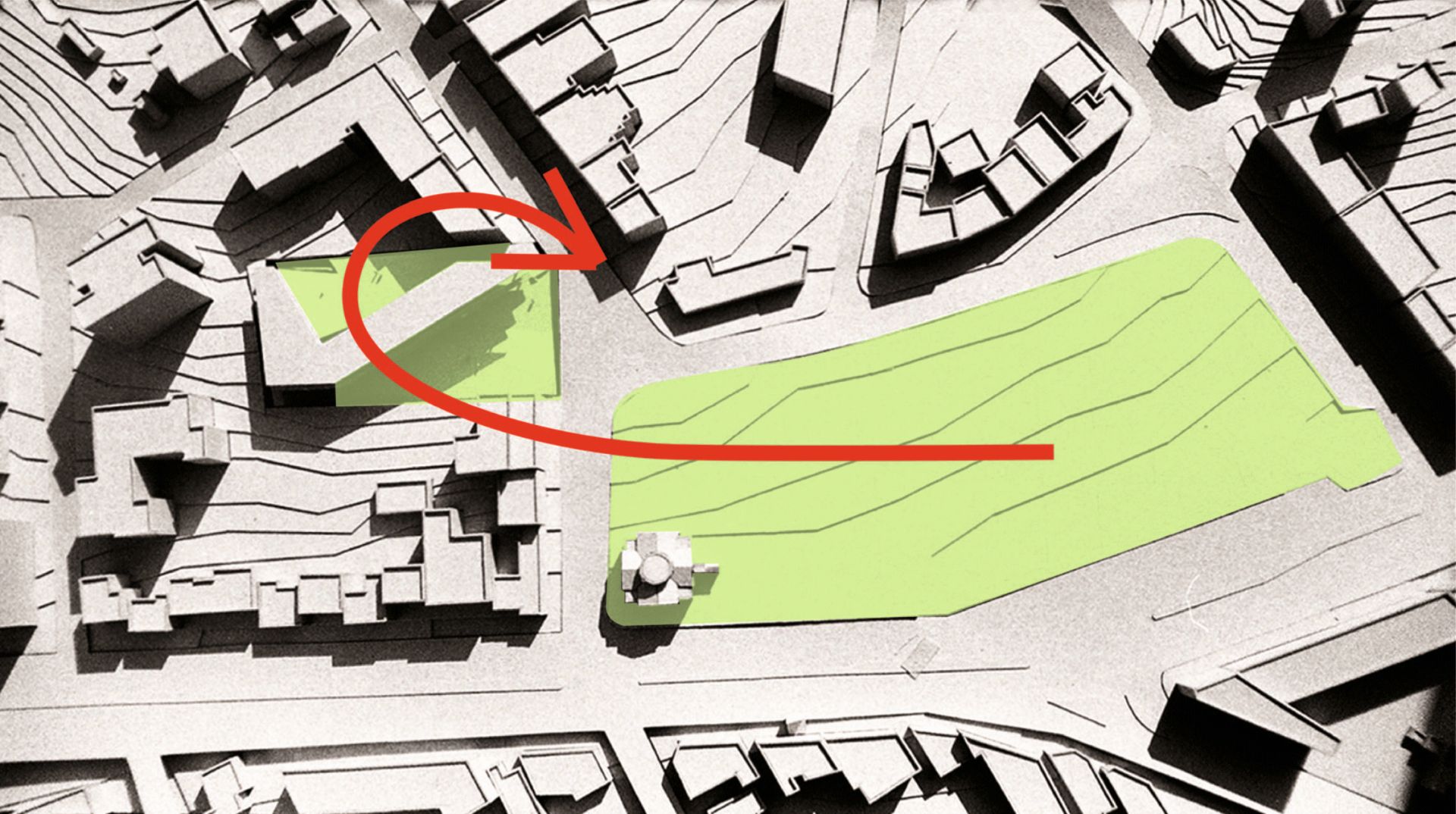 As basic design assumptions, it was considered that the mansion is the most important public building in the city, that its specific public character is expressed by its important substance and easy ownership by the citizens. The peculiarity of the program lies in the absence of a city council room. The most powerful design parameters are the topographical specificity of the area around the plot, located between the “upper” and the “lower” (with a significant altitude difference), and the existence of a wider, important one city, green belt, and a very powerful network of public buildings. Also, the plot is located at the boundary between the green and the residential area, visible from the Litaritsia (on a hill), and in front of it are small older buildings that are preserved.

The building is read as a movement that starts from the ground and rises. The scale is imparted by the slides of the volumes and the material hierarchies, which one understands by approaching

The main desire therefore was to adapt to the topographical and town planning features, especially the union of the “two” cities both within the building and its open space, which ought to correspond to the scale and importance of the town hall. This also entailed the choice of a single building block that does not break into a number of buildings betraying its true volume, as well as the choice of a single and modern design style that integrates the creations without being a coincidence of stylish lending. The building is read as a movement that starts from the ground and rises. The scale is imparted by the slides of the volumes and the material hierarchies that one can see by approaching. The desire to acquire the town hall led to the choice of a path that penetrates the closed building volume and bridges the two cities. This course is at the same time the very basic internal movement of the building, uniting its various levels, which are organized around a central inner patio. This choice is suited to the particular climatic conditions of the city. According to modern requirements, the building has been studied with simulations for adequate lighting and low energy consumption. 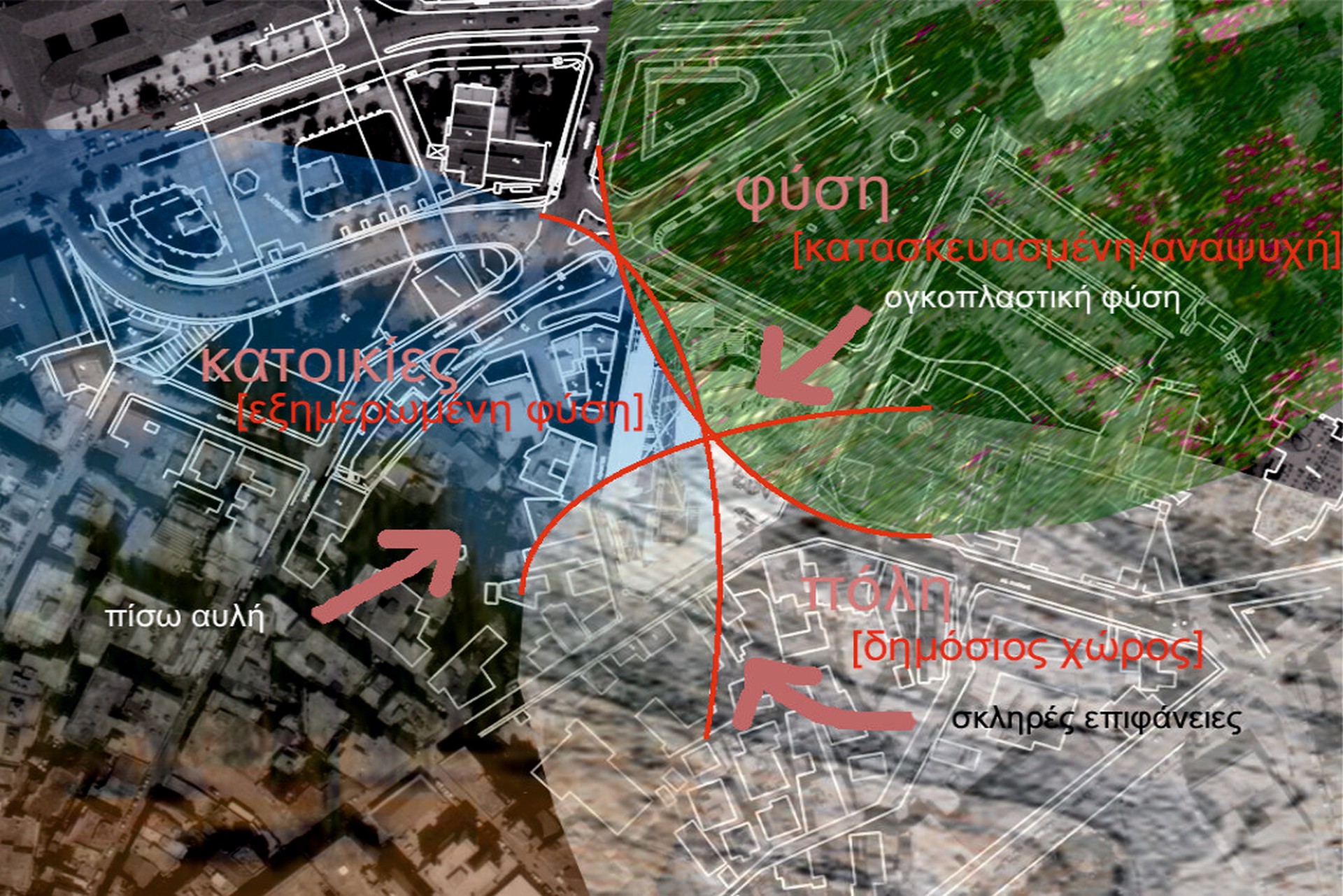 The lighthouse is a marginal construction: it is a human construction located on the boundary between earth and sea, sending a signal to the navy. It owes its special character to the fact that it is both a utilitarian and a symbolic point, which can be decoded in many ways. The specific place where the beacon will be erected, the southeast jetty at the port of Volos, is the end of a very intense and decisive line in the industrial landscape of the harbor.

Very close to the sea level (about +0.40m) the pier at one end is connected to the city by a metal bridge that allows the small boats to reach the marina, and at the other end it ends up in an enlarged space, which is characterized by the lighthouse. The latter is at the same time the first signal as you approach the city by the sea, but also the latter as you walk in the long mole.

In analogy with the industrial landscape dominated by large cranes, sails, and other naval constructions of a similar scale, we propose a light, intense metal construction.

The dynamism of such a construction corresponds to the operation of the lighthouse as the “end” of the long course on the moat, and symbolically expresses the dynamism of a modern and intense industrial city such as Volos

The dynamism of such a construction responds to the operation of the lighthouse as the “end” of the long course on the moat, and symbolically expresses the dynamism of a modern and intense industrial city like Volos. Both the landscape (artificial and natural) and the shape of the moat impose on the lighthouse the form of a spider web: first, its transparency allows the landscape to penetrate its elements, and secondly the whole structure spreads to the ground, creating a particular interest in visitor as he walks around. The least possible connections with the ground (3) were used to keep the latter as free as possible.

A Town Hall’s particularity comes from its double nature: it is a functional public space, where, on the one hand the municipality’s most important decisions are taken in representational or direct manner and on the other it serves and informs the citizen on different possibilities and actions on the local level. It is therefore a building with public character which incorporates the first level of a participatory democratic process. Therefore, the Town Hall has a clearly defined functional character but also a particular symbolic character as it is the most important reference for the local community and its evolution.

In the present case, the building’s urban role is not to complete a void within the existing urban tissue, but to become a core of development for the city and an example for further architectural interventions. That goes not just for the building itself, but also for its open space, which, by expanding the building’s internal functions acquires the same symbolic and functional importance as the building itself.

Therefore the Town Hall should be an easily recognizable public building, particularly functional and pleasant for staff and visitors alike, open towards the citizens, who should be able to use it in the most accessible manner, either as a citizens who participate in the decision making processes, either as visitors who accomplish an ordinary task, or as simple passers-by. The Town Hall as functional and architectural reference point has to have a subtle monumental character adjusted to the local particularities,   to express those, as well as the place’s origins and dynamics. It cannot be a boring office space, nor can it be left to pointless and ephemeral formalism. At the same time, it should absorb and summarize the culture and history of the city, without reverting to picturesque loans. It should be an attractor offering the most possibilities for the municipality’s creative development.